Samsung is a Smart Android phone which has been designed with many advanced features. Due to its advanced features, it has become the most popular and widely used Android device. One can use this Samsung Smart phone to store, capture and record images, HD videos, and other media files. It also supports various video file formats such as MP4, AVI, MOV, 3GP, WMV, and more.

Among all these video file formats, MP4 files are most commonly used video files in various electronic devices such as mobile phones, digital cameras, computer, iPhone, iPod, and more. This video format uses separate compression for both audio and video streams so it delivers high quality videos. But, sometimes when you try to play MP4 file on your Android phone, you may face some issues like audio is lagging behind video or vice versa, video freezes but audio continues to play etc. This usually happens due to corrupt or damaged MP4 file.

There are various reasons behind MP4 file corruption due to which there will be an interruption while watching it on your Samsung Smart phone or sometimes your Samsung device refuses to play a corrupt video file. As a result of this you will be searching a best repair tool in order to know how to repair MP4 Samsung. But, now there is nothing to worry about Samsung MP4 file repair as this can be done by using an advanced repair tool know as Video Repair Software. This repair tool can also be used to repair bad video files on various storage devices in just few mouse clicks.

In addition to above mentioned scenarios, there are few more reasons due to which MP4 file gets corrupt or damaged such as codec issue, upgradation of app, improper download, recovering lost or deleted MP4 file using unreliable third party tool etc.  So to make your corrupt file as a playable file or to repair MP4 Samsung you can use video repair software. It has inbuilt strong scanning algorithms which can effectively repair poor quality videos in short span of time.

Follow the steps to know how to repair MP4 Samsung:

Step 2: Connect your Samsung Smart phone to the system and then select the MP4 file from your Samsung device which you want to repair with “Corrupted File” button and also one “Healthy File” based on which the file will be repaired & press the “Repair” Button. 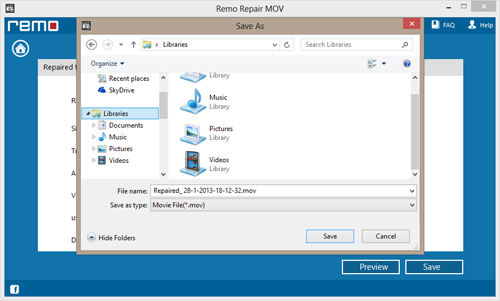